On June 13, 2012, it was announced that after more than 50 years of family management, the King Eddy Saloon had been sold and would be closing at the end of the summer. This news has been received with great concern by the many people who consider this last Skid Row bar to be an essential part of the cultural and social life of downtown Los Angeles, as well as a place of pilgrimage for fans of the great Los Angeles novelist John Fante, whose anti-hero Arturo Bandini famously squandered his first royalty check on the b-girls of the King Eddy’s basement speakeasy.

LAVA co-founder Richard Schave loves the King Eddy, and has done extensive research on the place and its role in LA’s literary and cultural history. In addition to the John Fante connection, it is the last bar standing in the neighborhood where novelist James M. Cain came to soak up the vernacular speech that he adapted into the hard-boiled American lingo of his breakout novel The Postman Always Rings Twice (1934).

In recognition of the importance of the King Eddy as a place of abiding human comfort and cultural significance, LAVA is pleased to present this night of poetry and fiction, featuring three presenters who are great voices of Los Angeles:

• Dan Fante will read selections both from his poetry and his recently published memoir about growing up with his father, novelist John Fante, “Fante: A Family’s Legacy of Writing, Drinking and Surviving.” https://danfante.net/

• Novelist and poet Jonathan Shaw will read a short story about his meeting with Charles Bukowski and the fist fight which ensued. https://www.scabvendor.com/blog/

• Ruben Ortega is a local L.A. writer of short stories.

On April 22, 2012, LAVA – The Los Angeles Visionaries Association invited the public  to an Open House at the historic home/gallery of LAVA Visionary April Dammann and her husband Ron Dammann, president of Stendahl Galleries, a participating gallery in Pacific Standard Time. 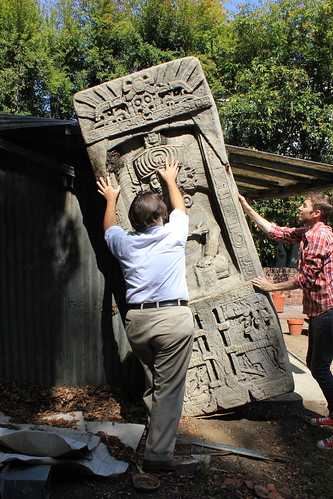 Scenes from the first LAVA Salon at Musso & Frank

On the last Sunday of each month, LAVA welcomes interested individuals to gather in downtown Los Angeles (noon-2pm), for a loosely structured conversational Salon featuring short presentations and opportunities to meet and connect with one another. If you’re interested in joining LAVA as a creative contributor or an attendee, we recommend Salon attendance as an introduction to this growing community.

Special program at the November 27 Salon:

• LAVA Visionary SUSANNA DAKIN is a sculptor, performance artist, writer and once upon a time publisher of artists’ books, magazines and a community newspaper. She is currently on the Board of the 18th Street Arts Center in Santa Monica, California. She has taught sculpture and drawing, exhibited both in solo and group shows, and completed a few large-scale sculpture commissions. She has done several unique performance pieces at various venues in southern California. Dakin’s most well known work was a year-long performance campaign around the United States as “An Artist for President” in 1983-84, in which she advanced the idea that “The Nation is the art work and we the people are the artists.” The book about that campaign, as timely today as it was then, is being published in fall 2011. Dakin will reprise the campaign as a book tour.  About “An Artist for President”: In 1984, Reagan was running for his second-term, while pursuing what would become a relentless, multi-decades long retreat from democratic ideals. Susanna Dakin, sculptor, performance artist and High Performance Magazine publisher, had an outlandish notion: she declared with the Federal Elections Commission as an Artist/Candidate for President of the United States. Now a compelling and high-entertaining book, as timely today as it was then, An Artist for President makes a case for the vital role of art and creativity in all aspects of life, including politics. This “biography of an event,” records the loony ideas people hold about woman, artists and the political process. November is Election Month, so cast your vote for art, civil liberties and freedom of expression, by attending this fun refection on where we’ve been and where we’re going.

On the last Sunday of each month, LAVA welcomes interested individuals to gather in downtown Los Angeles (noon-2pm), for a loosely structured conversational Salon featuring short presentations and opportunities to meet and connect with one another. If you’re interested in joining LAVA as a creative contributor or an attendee, we recommend Salon attendance as an introduction to this growing community.

Special program at the November 27 Salon:

LAVA is proud (and not too terrified, since we’ve been good this year!) to present the KRAMPUS CHOIR, who will literally kick-start the holiday season with their odes to the Real ghost of Christmas, Lord Krampus. You’ve heard all about Santa’s Evil Twin, who follows the Jolly One with burlap sack in hand, taking gifts away from miscreant children and giving them a thrashing to boot! This long-toothed, tongued charmer now has his very own CHOIR, who, in dulcet harmony, will regale our Visionaries and guests with such favorites as, “Bleeding through the Snow,” “O Shining Lump of Coal,” and “Bring a Switch, Jeannette Isabella.” King Krampus himself will be on hand to autograph your child’s deficiency notices. Don’t miss this one-time-only event!

On the last Sunday of each month, LAVA welcomes interested individuals to gather in downtown Los Angeles (noon-2pm), for a loosely structured conversational Salon featuring short presentations and opportunities to meet and connect with one another. If you’re interested in joining LAVA as a creative contributor or an attendee, we recommend Salon attendance as an introduction to this growing community. Special program at the October 30 Salon. • Science and art can play well together as evidenced in “Circuitry & Poetry” where LAVA Visionary JEFF BOYNTON’s DIY electronics accompany LAVA Visionary MONA JEAN CEDAR’s communicative arts of dance, poetry and sign language. More black art than science, circuit bending entails the subversive act of ripping open inexpensive electronics devices — ranging from children’s toys to professional keyboard instruments — exposing their circuit boards, and attacking their vulnerable insides by poking, probing, and prodding in the spirit of exploration to search for new sounds which are then activated at will. Mr. Boynton’s deep classical music background influences his performances on these ingenious circuit-bent instruments, providing a soundscape over which Mona Jean Cedar performs. Ms. Cedar creates her singular multi-layered approach to spoken word and movement by composing and choreographing with sign languages, both American and foreign. Concurrently cryptic and clearly communicative, the highly visual nature of sign language exponentially increases the expressiveness of the poetry and the dance. Together their unique talents create performances that astound with sound, pique with poetry and delight with dance. SALON WEEK UPDATE: In proverbial “Good News; Bad News” fashion, Mona Jean Cedar wished to share the following: The “Bad” News is that Jeff Boynton will be unable to join us at the LAVA presentation because — ta da! — he has been chosen to be a finalist in Moog’s (as in synthesizers) 2nd Circuit Bending Contest in Asheville, North Carolina next weekend! In his stead will be fellow bender/musician/actor/partner-in-art, ANDY BEN. Andy will be explaining and demonstrating a few of Jeff’s toys and some of his own. We will be bringing props from our marching band, The Thursday Evening Gentlemen’s Society Circuit Bending Marching Band and Ladies’ Auxiliary and perhaps even recruiting marchers. • Back by popular demand, LAVA Visionary JOE OESTERLE, author of the newly-released Weird Hollywood and the classic Weird California and Weird Las Vegas. Joe will be reading some spooky stories from his books as well as sharing some anecdotes from his weird road travels. Joe also promises to bring along one of the real life Weird Hollywood characters from his book. The multi-talented Joe Oesterle is a former Senior Editor of National Lampoon, a visual artist, musician, animator and curator of the strange and marvelous. Joe will be signing copies of Weird Hollywood.

On the last Sunday of each month, LAVA welcomes interested individuals to gather on the third floor of the historic Clifton’s Cafeteria in Downtown Los Angeles (noon-2pm), for a loosely structured conversational Salon featuring short presentations and opportunities to meet and connect with one another. If you’re interested in joining LAVA as a creative contributor or an attendee, we recommend Salon attendance as an introduction to this growing community. We also recommend the shortbread.

Special program at the August 28 Salon:

• LAVA Visionary Ruthann Friedman wrote the early bubble-pop anthem “Windy” for The Association while crashed out on Crosby’s couch, swung with Zappa’s crew, and she almost got that Jefferson Airplane vocalist slot before bitch goddess Grace slunk in. Ruthann’s 1970 LP Constant Companion is a recording of sublime beauty and abstract folky ruminations which should’ve sent ol’ Joni running to Essra Mohawk and Judee Sill for consolation (and inspiration!) — but sadly recognition was a long time in coming. Friedman’s lone 45, “Carry On (Glittering Dancer)” is another bit of genius, fleshed out by captivating Van Dyke Parks arrangements a la Smile or Song Cycle. At the Sunday Salon,  Ruthann will sing reflections of her life growing up in Los Angeles in the fifties and sixties, and let you in on intimate personal stories that have a universal appeal. Accompanied by her own guitar and the bass playing of David Jenkins, she bridges the gap between generations.

• Local artist and historian Al Guerrero is the LAVA Visionary behind the “Richard Ramirez – Night Stalker Walking Tour.” For the Sunday Salon, he will be conducting a short presentation and discussion on this bloody chapter of L.A. crime history. Attendees will experience a chilling narrative of the fear and terror that gripped the Los Angeles area during the fearful, hot summer 1985, during the Night Stalker’s wave of terror. Al will share first-hand accounts and reveal little known facts and gruesome details of the case, including details about the Night Stalker’s haunts in the downtown area surrounding the Salon. Immediately following the Sunday Salon, Al Guerroro’s “Richard Ramirez – Night Stalker Walking Tour” will depart from Clifton’s Cafeteria (This tour is now sold out; limited standby spots may be available on tour day). This event was a complete sell-out last year, so reservations are strongly recommended. Al advises guests as to the graphic nature of some portions of the tour. For further tour information, please visit this link or email nightstalkertourATgmailDOTcom

• Sorry, THE UKULADY’S previously announced appearance has been postponed until the September 25 Sunday Salon.

Clifton’s Cafeteria is at 648 South Broadway, near the corner of 7th Street. There are numerous paid parking lots nearby, and the closest Metro station is Pershing Square. Clifton’s is online at https://www.cliftonscafeteria.com

Click the photo to view scenes of Michael I. Kelley’s ballistics workshop at the last LAVA crime lab event. 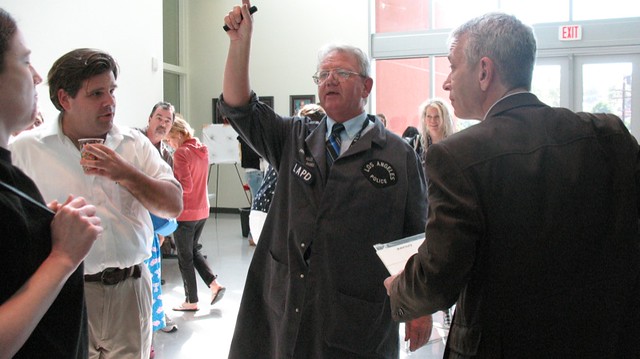