On the last Sunday of the month starting in March 2010, LAVA welcomes interested individuals to gather on the third floor of the historic Clifton’s Cafeteria in Downtown Los Angeles (noon-2pm), for a loosely structured conversational Salon featuring short presentations and opportunities to meet and connect with one another. If you’re interested in joining LAVA as a creative contributor or an attendee, we recommend Salon attendance as an introduction to this growing community. We also recommend the shortbread.

• A presentation of two recent publications from the ghoulish consortium The Ghost Hunters of Urban L.A. aka GHOULA (including LAVA Visionaries Richard Carradine and Lisa Mouse), Disneyland After Dark: A Haunted Guide to the Happiest Place on Earth and GHOULA Comix #1. Comic artists will be on hand to sign their work, and Lisa Mouse will be giving away free copies of her banned Death Duck drawing that was censored after the first printing of Disneyland After Dark.

• A table discussion hosted by Visionary Joe Oesterle, author of the just-released Weird Hollywood and the classic Weird California. The multi-talented Joe is a former Senior Editor of National Lampoon, a visual artist, musician and curator of the strange and marvelous. At the Sunday Salon, he’ll be sharing some stories that were too peculiar to include in Weird Hollywood, reflecting on the nature of eccentricity as a way of life, and signing copies of his new book.

• Mesmerelda, the Skid Row misfortune teller, will musically recount the lurid highlights of an unforgettable and—to some— unbelievable life. Tales of malevolent candy-givers and La Llorona’s terrorizing walk down Winston Street will be punctuated with glimpses into a foreboding future. Mesmerelda will also tell us where that ghoulish guzzler goes after she plies for drinks at the King Edward Saloon! Mesmie will be accompanied by renegade ex-members of Clowns and Fetuses, an L.A. improvisational ensemble, including Visionary Fortunato du Cressy.

• And more Halloween goodness from GHOULA: Visionary Lisa Mouse and colleagues will present the group’s first science project, a collaboration with filmmaker Anthony Deptula inspired by famed magician Harry Houdini’s experiments in communication beyond the grave. With SEE YOU IN 100 YEARS, you can participate in an attempt to recreate the Houdini Experiment using an Internet Time Capsule. Is there an after life? Harry Houdini had the same question. He even had a secret pass code with his beloved wife. A message sent from beyond to say “I’m here.” In the spirit of Houdini, GHOULA will pay homage to this experiment in a grand scale by creating a modern time capsule, documenting participants, digitally recording their secret pass codes, and then archiving the time capsule for one hundred years. Detailed instructions will be left in the hands of a respected institution. At the end of the hundred years a non-affiliated caretaker of the project will be selected to devise a team of mediums, psychics, and scientists to reach out to the time capsule participants (that’s YOU!).

Clifton’s Cafeteria is at 648 South Broadway, near the corner of 7th Street. There are numerous paid parking lots nearby, and the closest Metro station is Pershing Square. 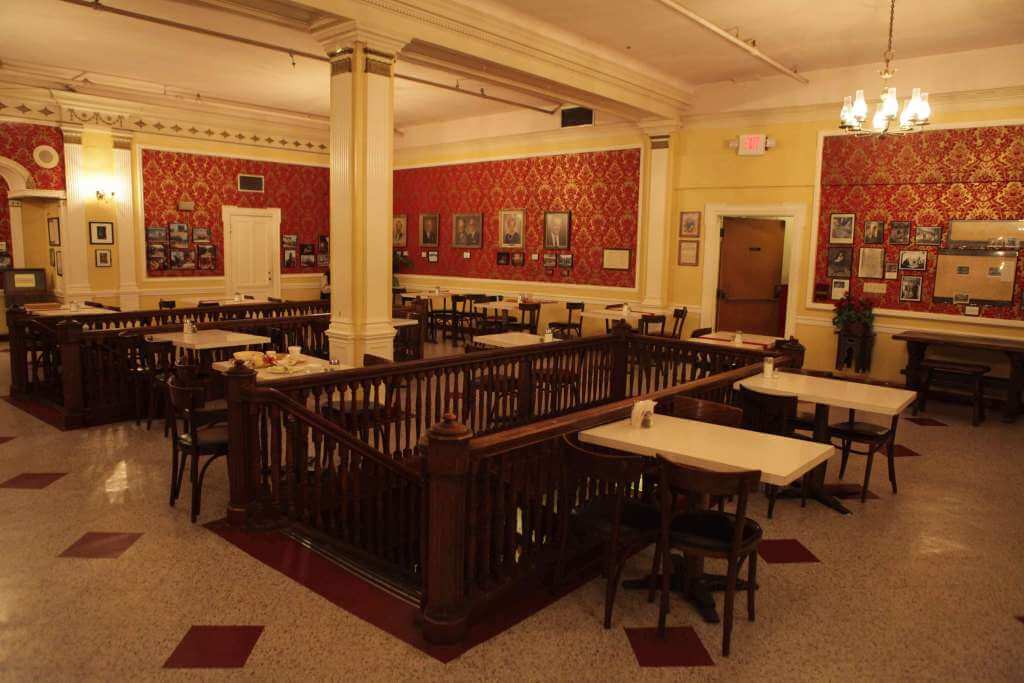