Brother Pancake’s invocation for the Reopening of Clifton’s Cafeteria

But the trouble with Clifton’s isn’t that it’s been closed for 1446 days (and didn’t re-open as planned last week), that it’s too expensive now, that the old gang doesn’t go there anymore or that the updates wrecked the joint.

No, the trouble with Clifton’s is that people care so darn much about it that they can barely contain themselves. This might be the first, but it won’t be the last bad review.

And we can certainly relate to Ms. Koester’s passion. For as long as we’ve been giving tours and exploring the lost history of Los Angeles, Clifford Clinton’s magnificent cafeteria has been our home in the heart of the city. Among its artificial pines and waterfalls, we hosted cultural Salons and Thanksgiving dinners, developed new tours, toasted visitors and marked important personal milestones.

And as we’ve fought to preserve historic landmarks and build a creative community, so much of that work at Clifton’s, we started to feel like the long-dead Clifford Clinton—gadfly, visionary, muckraker, activist, feeder of the hungry and builder of worlds—was a mentor, maybe even a friend. We’d often ask ourselves “What would Clifford Clinton do?”

And that never stopped, even when the big glass doors swung shut for the last time on September 25, 2011.

Now Clifton’s is coming back—changed, but not, we think, too much. We’ve toured every floor, and found the familiar spaces brightened and the new spaces beguiling.

Megan Koester loved Clifton’s, too, and she’s convinced herself that she and the old patrons, who she remembers as being homeless people and drug addicts, won’t be welcomed back.

Four years is a long time, though, and memories can play peculiar tricks.

The truth is that at the time it closed, the dominant demographic of Clifton’s patrons was working families (weekends) and the elderly poor (every day). If there were a lot of homeless or junkie patrons, you certainly couldn’t tell by looking at them. And in any case, everyone who came in the door, including the man who’d leave his bunny rabbit in a baby carriage on the terrazzo sidewalk out front, was treated as an honored guest, and allowed to linger over their meal, however modest. The closure left a big hole in Downtown. 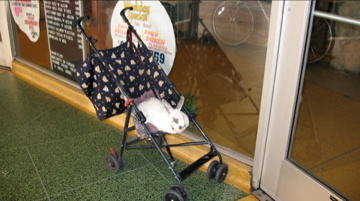 New Clifton’s proprietor Andrew Meieran is a smart man, and he recognizes the PR value in the visionary, idealistic Clifton’s brand. We would be very surprised if the affordable, welcoming cafeteria doesn’t act as a loss leader for the more profitable, upscale venues up- and downstairs. The architectural division of leaving the historic cafeteria spaces largely unchanged, while creating ambitious new venues in unfamiliar parts of the building, suggests that this is the logic behind the project.

A critical article like Megan Koester’s can be hard to read, but it clearly comes from a place of love—what the urban preservation theorists call Affective Ownership. It’s normal to fret about changes to Clifton’s if you adore the place. We think it’s too early to say what the new Clifton’s will be like, but if it isn’t a melting pot for all kinds of Angelenos, then it will be fair for critics and patrons to call that out.

Personally, we’re hopeful. Let’s take it one bowl of Jell-O at a time, and give the new Clifton’s a chance to exceed our varied, and valid, expectations.

The trouble with Clifton’s? Clifton’s is dearly beloved. Oh, to have such troubles!

Clifton’s Cafeteria re-opens—for real, this time—at 11am on Thursday, October 1. We’ll be there with bells on, and open minds. So if you see us, give us a jingle.

We’re back on the bus on Saturday on a rare Wild Wild Westside crime bus excursion to the strange, grim land of our childish days. And while supplies last, save $18 off your ticket with the coupon code snakeinthemailbox. Join us, do!