On the last Sunday of the month during the hours of 2-5pm, LAVA welcomes interested individuals to gather in downtown Los Angeles for the Sunday Salon, featuring a presentation by a LAVA Visionary and opportunities to meet and connect with one another. Immediately after the Salon, a walking tour expands on the Salon theme. If you’re interested in joining LAVA as a creative contributor or an attendee, we recommend Salon attendance as an introduction to this growing community.

The LAVA Sunday Salon and walking tour are free, but reservations are required. There are no “plus ones,” so tell your friends to sign up individually. Please don’t reserve unless you plan to attend.

To reserve your spot for this free event, click on the “Buy Tickets” button above.

ABOUT THE SALON & WALKING TOUR:

We have combined the Sunday Salon & Broadway on My Mind walking tour into a single event. The talk begins at 2pm and lasts about 45 minutes. We’ll break for about 15 minutes for people who have no checked in to do so, then leave for the walk around 3pm. The walk will last about 90 minutes.

Architectural historian Nathan Marsak, the LAVA Visionary of the Year for 2015, presents on the forgotten architectural landscape of nineteenth-century Los Angeles—a lost world whose most salient impulse was toward the imposing, rough-hewn blocks of the Romanesque style. Nathan’s talk will be an illustrated tour of the lost buildings of the Civic Center, followed by a walking tour of that portion of downtown.

It is especially striking that these structures, whose construction exuded solidity and permanence, should have been removed on so great a scale. Besides illuminating some of the most notable lost masterpieces from the Civic Center, Marsak’s lecture will visit those few remaining examples of the style. Attention will be given as well to the styles that fought for dominance in defining Victorian Los Angeles, e.g., French Empire.

On the last Sunday of each month during the hours of noon-2pm, LAVA welcomes interested individuals to gather in downtown Los Angeles for a loosely structured conversational Salon featuring short presentations and opportunities to meet and connect with one another. If you’re interested in joining LAVA as a creative contributor or an attendee, we recommend Salon attendance as an introduction to this growing community.

For a special LAVA Sunday Salon that includes a walking tour, you are invited to join architect and historian Alan Hess and Esotouric’s Richard Schave for a program dedicated to the nearby and endangered Times Mirror Square (1973).

This is the third event in the Pereira In Peril series—earlier talks were on the Metropolitan Water District (1963) and LACMA campus (1965) — and will focus on the redevelopment threat facing the recently sold Times Mirror Square and its effect on the legacy of mid-century architect and city planner William L. Pereira, whose corporate and civic work helped define Los Angeles.

The first half of the event will be a LAVA Sunday Salon discussion in the basement of Grand Central Market. Then the group will walk two blocks north to Times Mirror Square, where we will continue to refine the discussion of Pereira’s legacy and significance while viewing the 1973 black glass corporate headquarters. This widely misunderstood structure at the northwest corner of the historic Los Angeles Times compound reveals fascinating layers of change in the city’s architectural style, the Chandler family’s relationship with their newspaper and Pereira’s evolution as an architect. With its future uncertain, there has never been a better time to get to know Times Mirror Square. 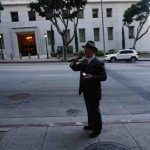