Join LAVA for our revived free monthly Sunday Salon series. We return to South Broadway, to the mezzanine of Les Noces du Figaro, which was recently opened by the family behind Figaro Bistro in Los Feliz. This handsome space was formerly Schaber’s Cafeteria (Charles F. Plummer, 1928), and the mezzanine features wonderful views of the Los Angeles Theatre.

On the last Sunday of each month, LAVA welcomes interested individuals to gather in downtown Los Angeles (noon-2pm), for a structured Salon featuring formal presentations and opportunities to meet and connect with one another. If you’re interested in joining LAVA as a creative contributor or an attendee, we recommend Salon attendance as an introduction to this growing community. We also recommend the eclairs.

Read about the original Sunday Salon at Clifton’s Cafeteria here.

The Salon will be broken into two distinct presentations each lasting about 45 minutes. You are encouraged to arrive early if you wish to order food and beverages from the counter downstairs, and bring your meal upstairs.

The presentation will consist of two distinct elements: 1) a projected 35-minute presentation during which photographer J. Scott Smith describes the origins and creative process behind his 29 Palms project. After the talk, join Scott for a pop-up gallery show featuring one or two full-scale finished works (3’ x 5’) along with a few smaller sized pieces (18.5” x 30”) on display in the mezzanine.

29 Palms is a mirage of sorts, a photographic re-imagining of the original oasis of twenty-nine native palms around which the desert city of the same name developed. Washingtonia filifera, the Golden State’s only indigenous palm, is featured in this collection alongside a remarkable variety of geographic transplants that flourish in Southern California’s benign climate. Captured with a large format view camera on 8 × 10” film and rendered in high-resolution 38 × 60” chromogenic prints, the 29 Palms series is both a typological study of individual palm trunks and a shimmering reflection of the region’s ethnically diverse human population.

I became aware of the extraordinary beauty of palm trunks when my beloved dog began to slow in his old age. Walking through a Santa Monica park lined with palms, I confronted their trunks at close range while Buck lingered and sniffed around the bases. Their intricate patterns evoked abstract landscapes and I resolved to create formal portraits by visually severing the columnar trunks from crown and base. I developed a fascination with the history of Southern California’s iconic palms and sought out both typical and unique specimens in public and private spaces.

Well, our speaker, Gordon Pattison, can tell you and show you because he and his family lived there. The Pattison family owned the Castle and Salt Box, among others of the old Victorian buildings that were once there. Gordon will tell the story of Bunker Hill from a personal perspective, through recollections inspired from historical photographs of Bunker Hill as well as family photos taken there in the 1930s and 1940s.

Old Bunker Hill isn’t gone. It floats ethereally in memory above Hope, Grand, Olive and Hill Street. And after this Sunday Salon, it will live in your imagination, too. 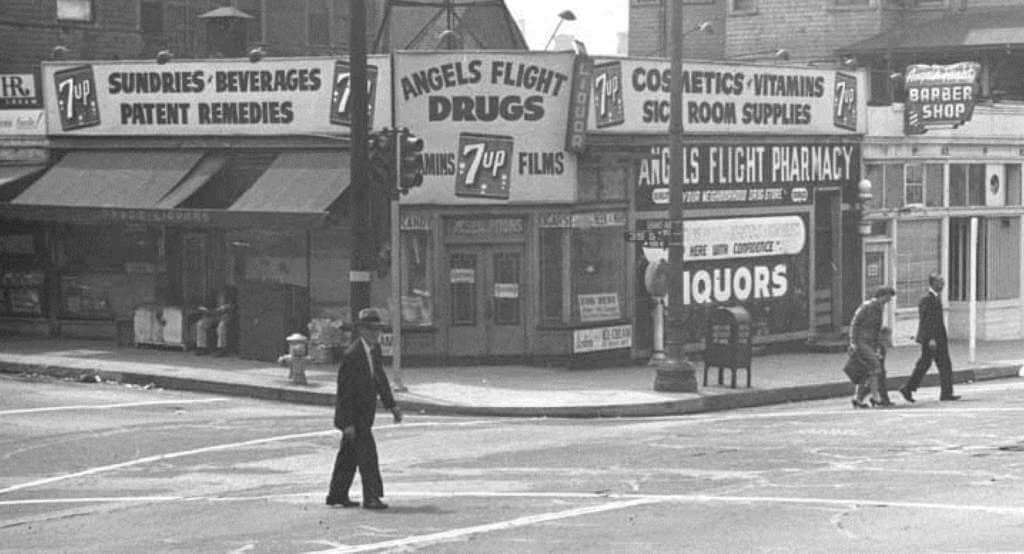